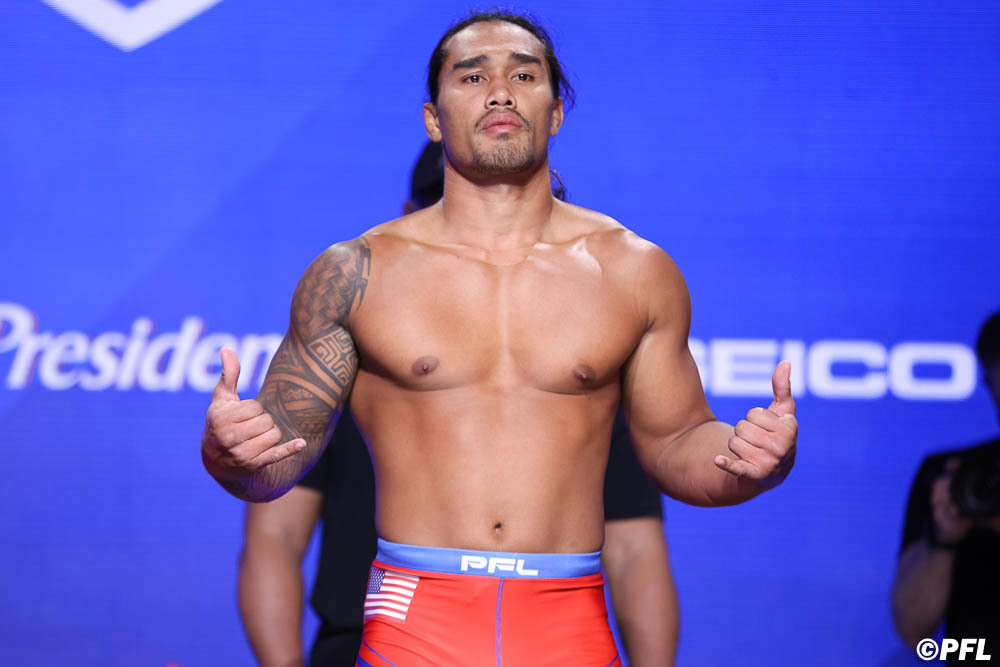 Ray Cooper III is just one win away from pocketing yet another million-dollar PFL championship.

The PFL went without a season in 2020 before picking back up in 2021 where multiple big-name additions entered the fold. Going forward in the world, eventual normalcy will restore the idea of cross-promotion in the sport to its fullest — PFL CEO Peter Murray has seemingly opened up to the idea as this year’s finals draw near.

As a reigning champion himself, Cooper loves the idea of the best coming together.

“It would be huge for the sport,” Cooper told BJPenn.com. “It would be just like boxing with the WBO fighting the IBF champs. I don’t know why they don’t do that. It’s just a measuring stick with the promotors to see who’s bigger, you know what I mean? But that would just open up so many doors for planning the fighters to fight and see who really is the best. I think I’m the best. I feel like I would outwrestle Kamaru Usman any day of the week. Hopefully, it can get done and we can do these big super fights. Because anybody in the UFC can get it. I’m the top of them all. I’m ready and that would be awesome.”

The 23-7-1 Pearl City native is unbeaten in six-straight outings with his last being perhaps the biggest victory of his career. In the Aug. 13 welterweight semifinals, Cooper dominated former Bellator champion and UFC title challenger Rory MacDonald en route to a unanimous decision.

With several big wins under his belt prior — the two over Jake Shields standing out as highlights — Cooper has still flown a bit under the radar when it comes to receiving the credit he’s rightfully earned. However, it’s no big deal to him as he just stays on track with his priorities in check.

“It’s just another fight,” Cooper said of returning to his third PFL Championship. “This is where your goal is. To be at the finals match just like in wrestling. I expect myself to be there every single time for as long as I’m with the PFL I’m always going to be in the finals. So it’s just another day in the office, man. Go in there, get my belt, and collect that check. That’s all that’s on my mind.

“I’m not surprised by anything. I know what [Rory’s] whole game plan was, he was going to try and wrestle me even though I’m a wrestler first and foremost, I can just punch. But I grew up wrestling and I think I’m the best wrestler there is in MMA. So there’s nothing anybody can try to outwrestle me with. If you try, I’m gonna put you on your back and you’re gonna be there until I decide to let you up. So it was nothing surprising to me.

“What was surprising was he shot within like the first frickin’ ten seconds of the fight and I thought we were gonna trade a little bit,” he added. “But that’s how it played out.”

MacDonald wasn’t the only victim to be swallowed up by the PFL’s unique format. In 2021, the promotion added other big names such as former UFC champions Fabricio Werdum and Anthony Pettis — neither of which were able to get their hand raised in three combined appearances. For Cooper, he just sees the surprise results as a testament to how much better the format makes everyone who’s gone through it.

“The way it’s formatted, these guys cannot handle fighting so many times in a year,” Cooper said. “I think it just comes down to mentally, too. Having to make weight, having to train, even if you hurt something, you still get like seven more weeks until you gotta fight again. So it plays with your mind and you just gotta be mentally tough. Not many promotions are doing what we’re doing. Bellator’s doing promotions but they’re happening like two years ongoing. That’s crazy. PFL is just climbing, we’ll get to the big stage soon.

“We got some good fighters. Just because you came from the UFC doesn’t mean crap. Plenty of UFC guys are not top caliber either. Probably only the top 5 guys in each weight class are top-tier guys. They got a big roster but not all those guys are high level. Them not making the finals, I wasn’t — Werdum’s what? He’s almost 50. 45 or something like that. And Pettis is up there too in the age. Rory’s still young, he’s probably the only one that’s still up there in the top welterweights and everybody says he’s old. He’s only frickin’ 32. He’s not old, I’m only 28, he’s four years older than me. That don’t mean crap. So Rory was the only one that was at the level of being in the playoffs and maybe reaching the finals if he wasn’t on my side of the bracket. But he was and that turned out bad for him.”

Standing across from Ray Cooper III in this year’s finals will be a fellow homegrown PFL talent as well as a former rival of Cooper’s, Russia’s Magomed Magomedkerimov.

The duo first met in PFL’s inaugural welterweight championship bout in 2018 that saw Magomedkerimov walk away with the title. The rematch was on tap for the 2019 season until Magomedkerimov fell ill — now they’re set to run it back on Oct. 27 in Fort Lauderdale, Florida.

While the Hawaiian has been on a great run of his own and recalls feeling his inexperience show in the initial encounter, he now feels more mature and is no longer making “amateur mistakes”. Magomedkerimov (29-5), on the other hand, has been flawless in the PFL having not lost in 13-straight bouts dating back to 2015.

“He fights the same,” Cooper said. “He’s going to try to take me down just like he tries to take everybody down, try to wrestle me and that’s pretty much it. I’m ready for everything. He ain’t going to get the same choke on me like he did last time, and I’m just gonna go in there and run through him, get that check and get ready for the next season.”

After three straight seasons involving Ray Cooper III in a finals bout, it just wouldn’t feel the same without him. Yet, the possibility for new ventures is still intriguing to the 28-year old.

Like anyone, Cooper just wants to be treated properly no matter where he is. Though, some historic luxuries added into the mix wouldn’t hurt. It’s all about taking things one step at a time and the rest will follow suit.

“Depends on what happens after the fight,” Cooper said of his future with the PFL. “I’m gonna win but we’re coming up on the end of this year’s contract so I don’t know, we’ll see. I always love winning a million dollars every year or every six months. So as long as PFL keeps treating me well, I’m staying and keep on racking up titles and racking up checks.

“I’ve been advocating for [PFL in Hawaii]. I mean, Bellator did it and I think we’re just getting bigger and bigger. We’re on the same platform as the UFC so for them to come here would be awesome. I’m the only Hawaii fighter in the PFL and I believe I’m the biggest name in the PFL so in the future they’re gonna come here because it’s gonna be hard not to.”