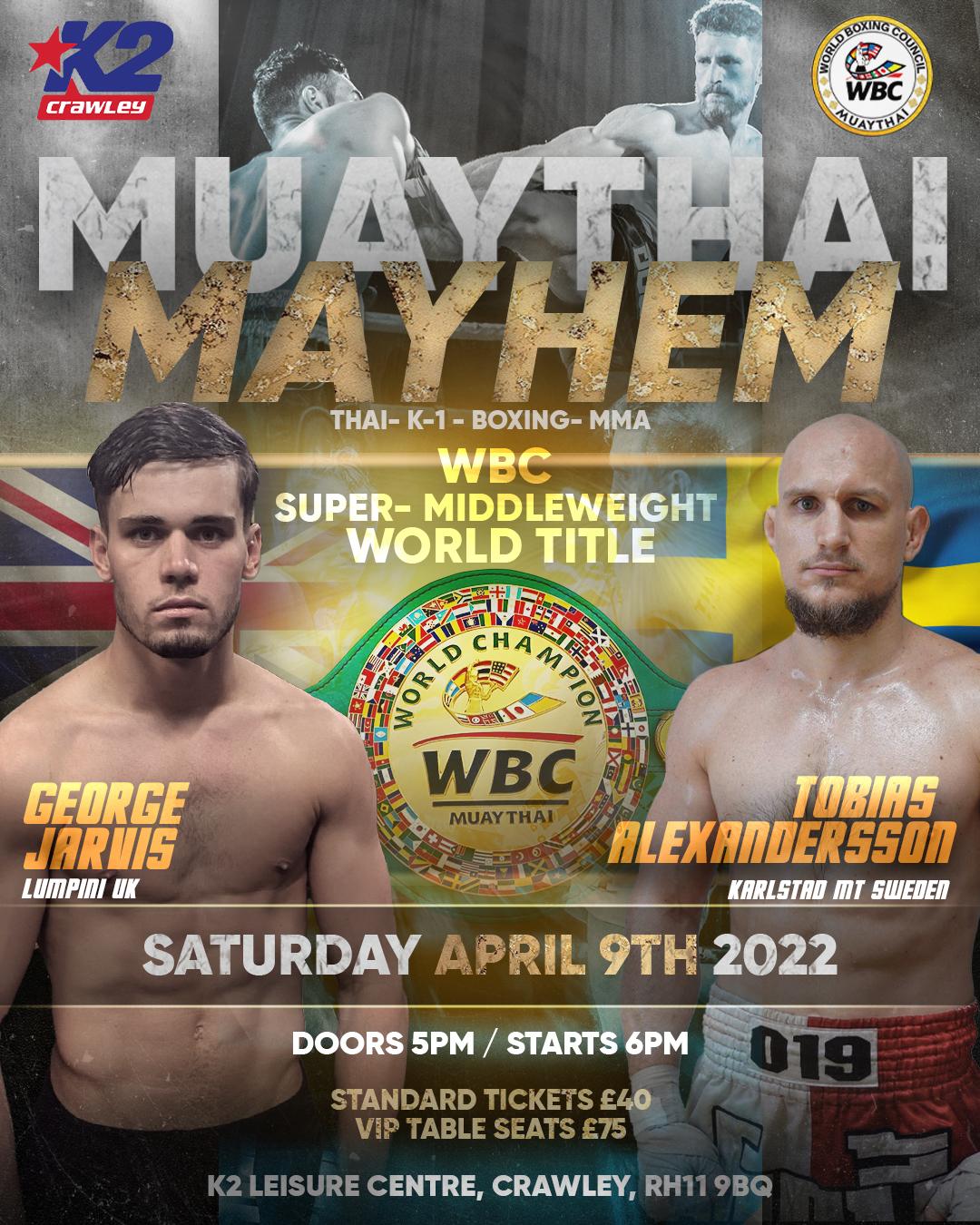 MuayThai Mayhem is back on the 9th of April with a night filled with action of Muay Thai, K-1 and MMA as there is 2 WBC titles on the line, as well as a prize fighting title, with plenty of high-level fights to excite any fight fan. This is a fight card you do not want to miss out on!

The main event of the evening is for the WBC Super-Middleweight title as George Jarvis who is coming off two impressive wins over some of Europe’s finest talents and is looking to keep his winning streak with another impressive win. However, in his way is Sweden’s Tobias Alexandersson who is a tough customer and will be looking to drag Jarvis into the depth of hell and back in this fight to make sure he can become the WBC Super-Middleweight champion. Both fighters are looking to prove to the world that they are a force to be reckoned with in Muay Thai.

The Co-Main event of the evening is for the WBC Super Featherweight British Title as Dylan burke looks to prove why he is the best Super Featherweight in Britain, by stopping his opponent with an emphatic finish to put an exclamation point on the start of his reign as WBC British champion. Standing in his way is a hardened contender in Manchester’s Jonno Chipchase, who will be looking to butcher his opponent with his razor like elbows and knees to make a statement on why he is the best in Britain.

Another exciting matchup is a MMA middleweight bout as veteran Dean Hawkins will be looking to use his experience in the cage and his prowess to try and secure a win and get back winning after a long layoff. With his last fight being a winning appearance in 2018, he will be looking to show fighters and fans that he doesn’t have ring rust and it’s just a myth. Looking to ruin his return to the octagon is the up-and-coming Khan Whitlock, who will be looking to show the veteran that the here and now is the future of the sport and looking to get a big win over a credible name within the British MMA scene, with a big early finish. This fight has fireworks written all over it!

If you are looking to watch this fight you can buy tickets from fighters or buy the PPV here: https://www.mmatv.co.uk/muay-thai/muay-thai-mayhem/?fbclid=IwAR2hx2aqY3gRr9IbDLIBoeH6cq6QR7UYItT-Ck7hQBA8zP4wT0Sf9NUaH_c

How can I watch MMA TV