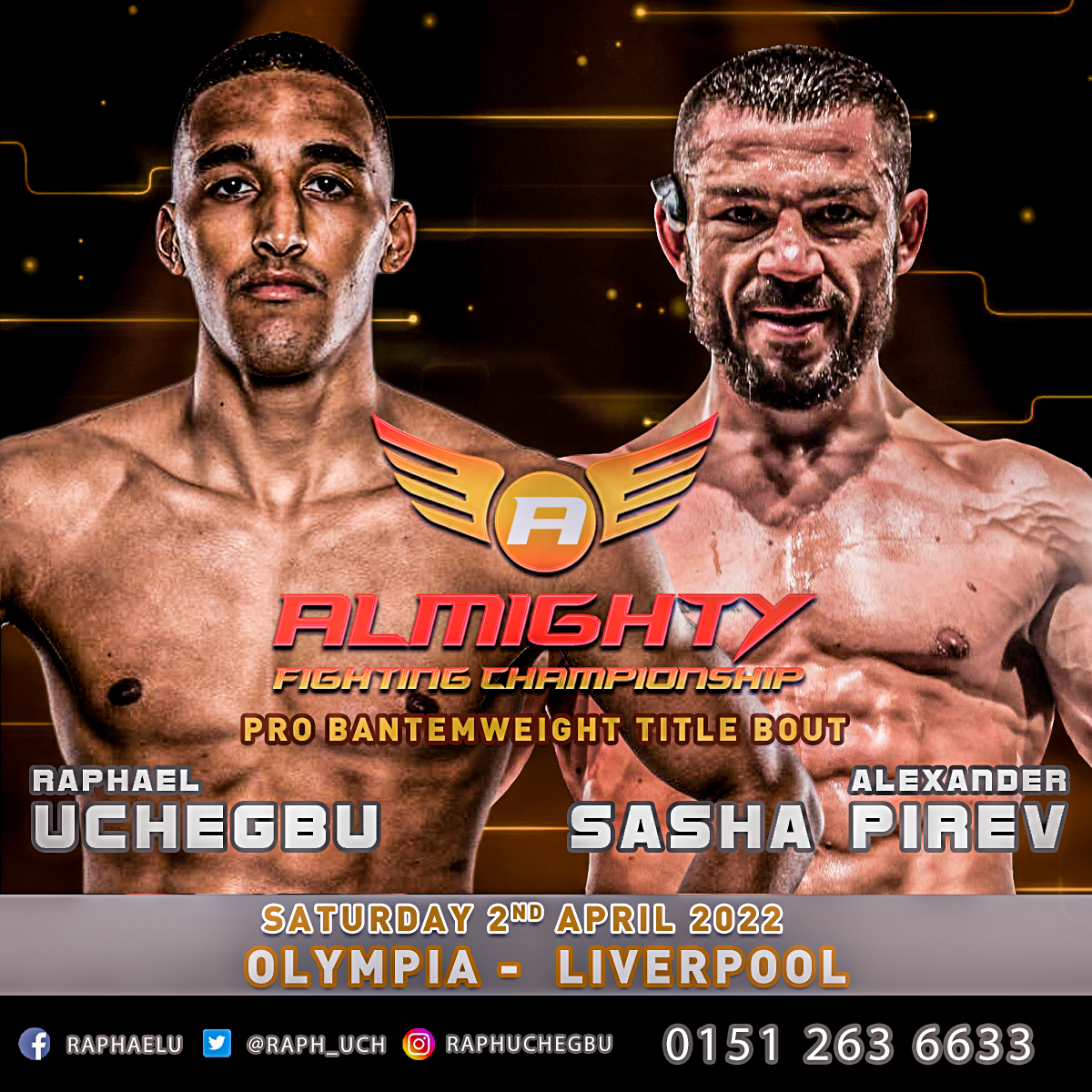 The main event of the night is for The Vacant Almighty FC Bantamweight title, Team Kaobon’s, who’s known for a few names like Darren Till and Tom Aspinal who are Ranked UFC fighter. Raphael Uchegbu is looking to keep his undefeated streak alive as the Bellator alumni will try and extend his submission finishes, as 60% of his fights have ended by submission. Standing in his way is the Moldovan Alexander Sasha Pirev, who is fighting out of American Top Team Rome, is looking to extend his win streak while looking to dismantle Uchegbu’s undefeated streak and beat him in his own city. He will be looking to try to keep the fight standing and end with a KO/TKO as 66.67% of his wins have come from either a TKO or a KO.

The Co-Main event of the night is a Professional Lightweight contest and is shaping up to be a highly technical bout as the Peruvian Aron Bowe, representing Fighting Club Luxembourg, will be looking to grind his way to a victory by mixing it up very well inside the cage. With 66% of his fights coming from the judge’s decision, if he gets his way, he will be looking to extend his winning streak. However, standing in Bowe’s way is a surging rising star Aspire’s Tom Mullen, who is looking to get back to winning ways. The Cage Warriors Alumni was an undefeated amateur where 87.5% of his wins came by submission, and as a professional he carries an 100% finish rate with his only win being by a head kick TKO. Mullen will be looking to mix his high-level grappling with his striking to try earning yet another finish. This has fight of the night potential.

The next bout is the 5th fight on the Pro card and is a Lightweight Bout Where Team Kaobon’s, Home of Darren Till, Anthony O’Connor the Cage Warriors Veteran is looking to get back onto winning ways by trying to get the win by KO/TKO. 50% of his wins have come from KO/TKO however he has slick grappling skills, so a knockout isn’t his only option to victory. His Opponent the Norwegian Ole-Jorgen Mandt Johnsen, representing Frontline MMA, is also looking to get back onto winning way as the oktagon Alumni doesn’t discriminate when it comes to winning a fight as each of his fights has come by either submission KO/TKO or the judge’s scorecards. This fight will be very back and forth with both fighters very capable of mixing it up well and trying hard to get back onto winning ways.

The 4th fight on the pro card is a Bantamweight bout where SBC South Shields Mitch Dobbins is making his professional Debut and is looking to carry on his winning ways. The Cage Warriors Alumni always comes to fight and bring the action forward and impose his game plan to grind the victory, as most of his amateur wins came from the judge’s scorecards. Looking to spoil the perfect Debut is aspires Marlon Jones, who is also making his professional debut after having an illustrious amateur career he looks to carry on his winning ways by looking to mix it up anyway he can, to ensure the fight doesn’t fall into the hands of the judges.