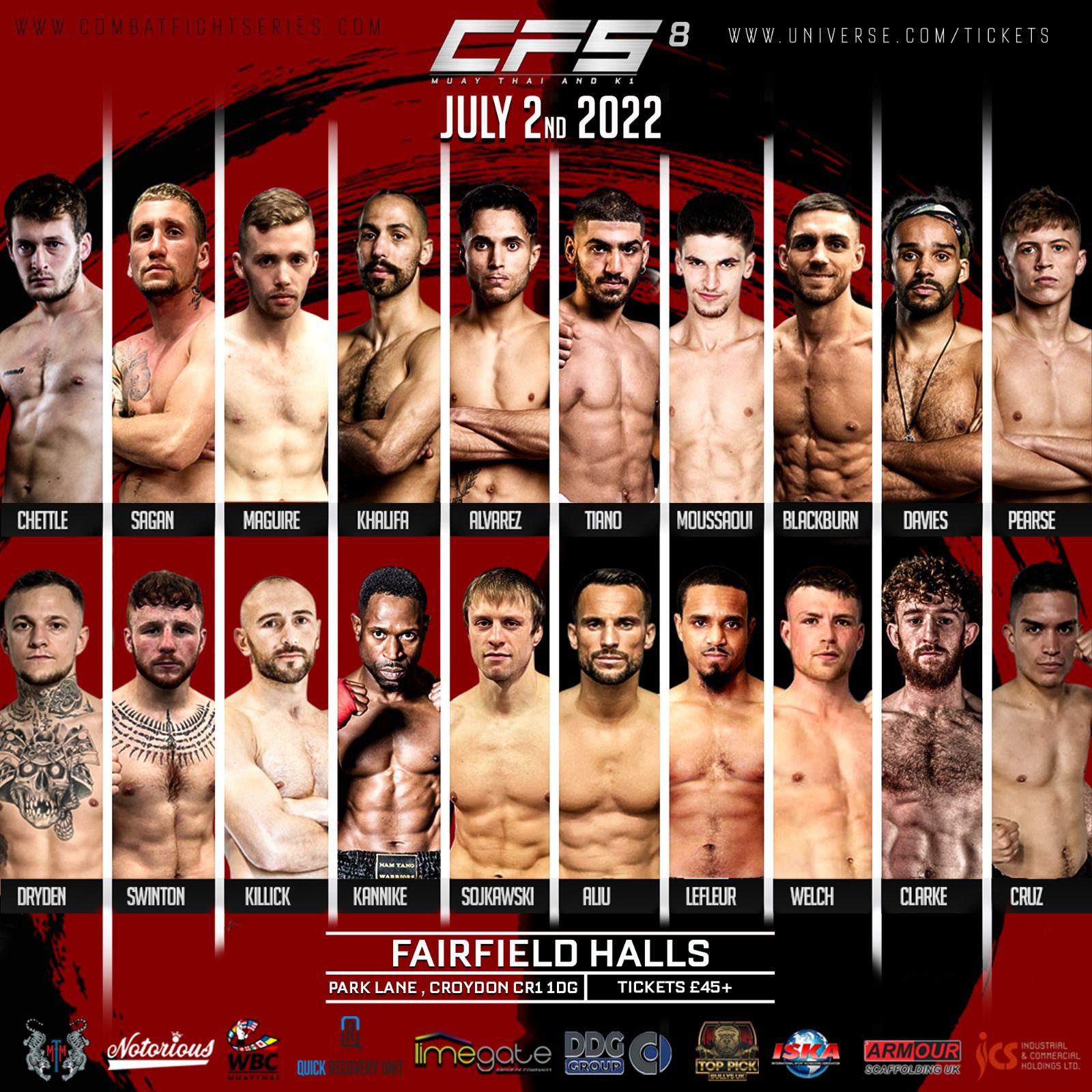 Combat Fight Series (CFS) is back with CFS 8 on Saturday 2nd July with the action kicking off at 2pm (GMT), boasting a stacked fight card with having around 20 fights with 5 of them being title fights. With a mixture of Muay Thai and Kickboxing bouts this card is sure to entertain fight fans from around the world as you will get to witness young hungry fighters looking to make their mark on the world as well as veterans battling to solidify their legacy in their respected sport. Make sure you don’t miss on this card, so you don’t miss any of the world class action unfold and witness history take place.

ISKA 61KG British title is the prize for two young unbeaten fighters are looking to square off to make history as Kory Chettle, who is always dangerous looking for ways to impose his will on opponents and always looks for angles to punish his opponents as he sees fits. His Opponent Alfie Pearse is coming off an impressive stoppage win at CFS 7 and will be hoping for a repeat performance again in the CFS ring, with having a lot of hard work and dedication going into this camp to ensure the victory and to not let his opponent impose their game plan. With the mindset of living and breathing the sport he believes the sky’s the limit when it comes to his potential as he said this “This is more than just a sport for me it means everything, and I can’t wait to showcase that in July.”

ISKA 55kg English title is the only women’s title fight of the evening and its not one to miss as the #7 in the UK Holly Connaughton has been climbing her way through the ranks to be given the opportunity to fight for such a prestigious title and is taking this fight very seriously with having plenty of hard rounds in the gym. So she walks into the ring with the best version of herself saying “Super excited to be given the opportunity to be fighting for the ISKA English Title… never trained so hard! The belt is mine!” Standing in Holly’s way is the undefeated Welshwomen Tallie Welsh who has been dispatching her opponents with class to ensure she stays undefeated and on Saturday she will be looking to become an undefeated champion. However, she isn’t getting too far ahead of herself as she’s aware that she is fighting a high-level opponent and cant make any mistakes as they will be capitalised on. She had this to say “I’m really excited to get back in the ring and fight for the English Title against a top-level opponent on such a great show!”

ISKA 72.5KG European title is the prize for two lads who will be looking to showcase their skills and entertain the fans watching. Jack Maguire has been on a good run of form in his last few fights and is a fighter always to watch out for, always looking to entertain the crowd and putting on world class fights. His opponent Glyn Blackburn will be looking to also carry on his good run of form by capping it off with taking the European title home to hang on the mantelpiece and solidify himself as one of the best in Europe while looking to display his improvements within this fight showing; that he is still growing as a fighter and is yet to reach his final form. He said “I’m mentally in a great place and will put a much better version of myself on display.”

CFS 68KG European K1 title will be decided as two hungry competitors go head-to-head. Anthony Kannike, who is a strong technical fighter who possesses explosive knockout power, is a crowd pleaser and he always pushes for the stoppage. He never takes a back step in a fight and is looking to dominate every opponent who steps through the ropes until he is recognised as one of the best fighters in the world. His opponent Solomon Lefleur is confident in his abilities to dispatch such a strong and dangerous opponent to take a step in collecting as much as championship gold as he can to prove himself as the worlds best, while collecting stoppage victories along his way. He said this “Definitely looking to put on a great performance as I’ve been training hard as always. I believe my opponent is strong and so I’ll always take him seriously. But either way I’m coming for the win and always want the stoppage.”

If you were unable to get tickets don’t worry as you can watch the PPV for £12.99 and watch all this world class action in the comfort of your own home just click the link:  https://www.mmatv.co.uk/muay-thai/combat-fight-series-8/