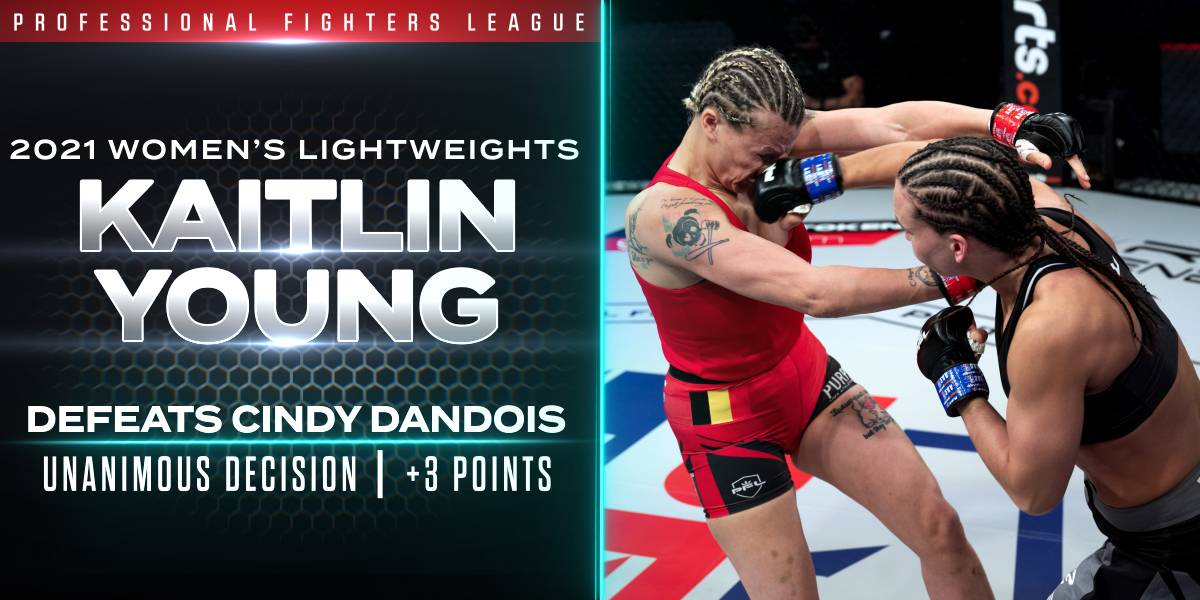 Two longtime veterans crossed paths on the PFL 3 card on Thursday, May 6 when former Invicta FC title challenger Kaitlin Young (12-10-1) took on UFC and Bellator MMA alum Cindy Dandois (16-6) in a Women’s Lightweight bout. Young is a decorated standup fighter who is a former World Muay Thai champion and holds a black belt in taekwondo. Belgium’s Dandois is a judo black belt who entered her League debut riding a four-fight winning streak.

Young landed a right hand over the top as soon as the fight began. Dandois tried to clinch and Young was able to separate. The jab of Young kept Dandois on the outside. A flailing right hand from Dandois missed the mark. A knee from the Belgian landed as she again looked to clinch. They moved to the fence, but Young quickly broke free. Dandois continued to look for the clinch as Young stayed at range. Young was technical with her strikes, repeatedly landing jab-cross combinations. Dandois tried for a judo throw, but Young rolled with her to find top position and bounce right back to her feet. The right hand of Young found the jaw of Dandois multiple times in succession late in the round.

The forward march of Dandois continued in round two. Young cracked her with a right hand and then an uppercut. Dandois grabbed a hold of Young and pulled herself to the fence. Young framed well and pushed away from the grappler. The jab of Young kept Dandois at bay. A shot from Dandois was easily stuffed by Young as she sprawled and returned to her feet. The movement and footwork of Young was crisp and clean as she landed from the outside. Dandois chased Young recklessly, absorbing counter punches from Young. Another shot from Dandois was brushed aside by Young as the frame came to an end.

Dandois looped a right hand and fired a push kick to start the final frame. Young evaded and then landed with a knee to the midsection of Dandois. The constant pressure from Dandois had little effect as Young stayed outside and landed with punches. Dandois looked for a throw and dragged the fight to the ground. During the scramble, Dandois attacked the neck of Young with a high-elbow guillotine choke. Young did not panic and freed herself from the submission attempt. They returned to striking range and traded jabs. A heavy right hand from Young cracked Dandois, but did not slow her advance. A late head kick from Young missed Dandois just as the bell sounded.

The fight was sent to the judges for a verdict and Young swept the scorecards to earn three points in the Women’s Lightweight standings.