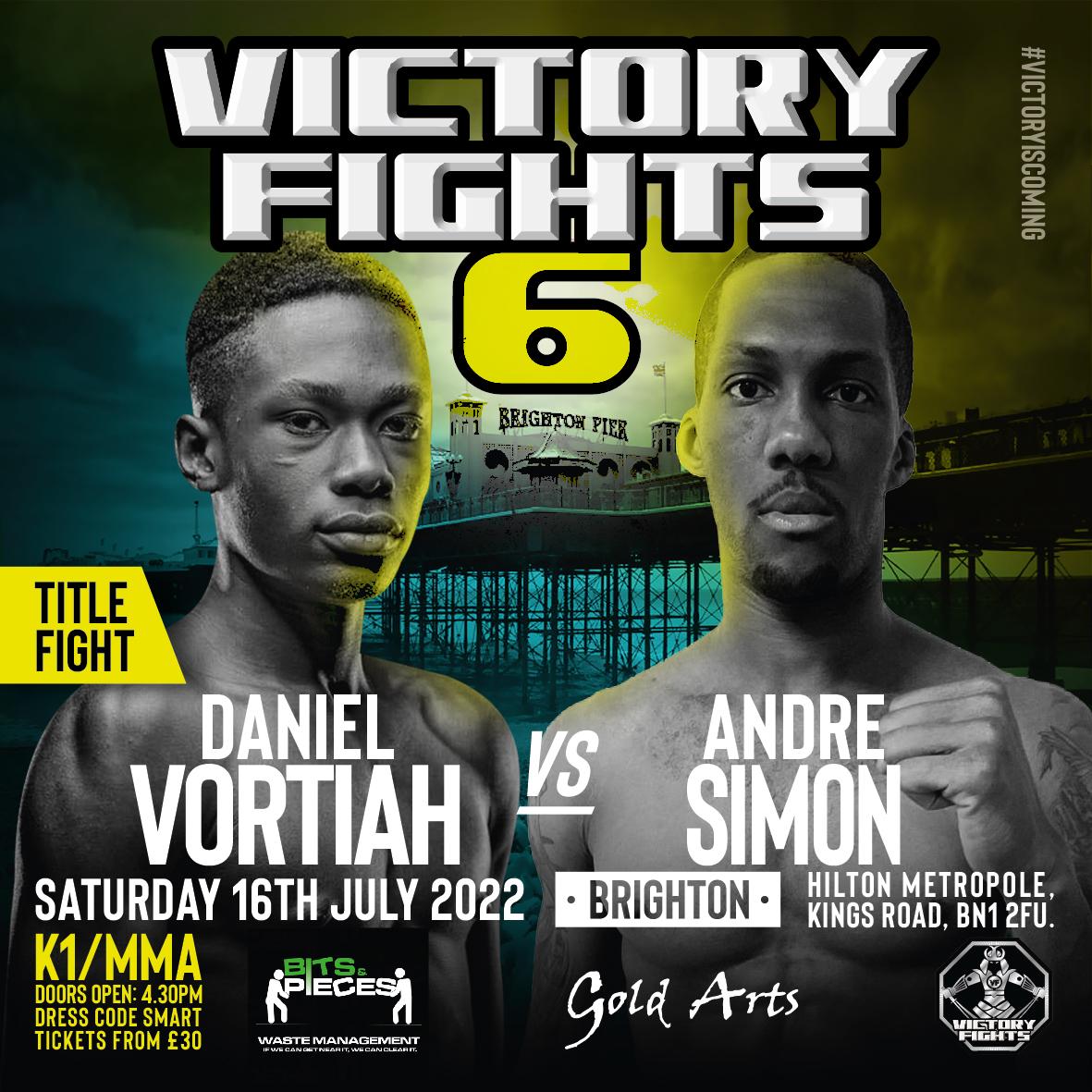 Victory fights is back with their 6th show and it’s not a card to sleep on as it has two title bouts to round the night off after plenty of exciting fights to keep fans eyes glued to the cage. It has some of the best professional and amateur fighters going against each other in their quest to be the best in the UK and the world. A word of advice: only go for a drink or the toilet during the intermission or you will miss some spectacular action!

The Main event of the night is a pro K1 (Kickboxing) title bout between the ever-dangerous Daniel Vortiah, who is pitted against a very tough opponent Andre Simon. Vortiah is a ferocious fighter with ridiculous knockout power, always going forward to seek the big finishes. However, he isn’t a one trick pony as he has high level striking technique to couple up with his surreal power. He is without a doubt a future star in the making as his last trip to the Victory Fights cage you could hear the chants of his name echo around the arena, creating an electric atmosphere. Vortiah will be looking to add another belt to the collection this Saturday with a huge statement. In his way is a very tough opponent and match up as Simon will use his long range to keep out the way of that explosive power and will be looking to use his pristine technique and savage clinch game to nullify Vortiah’s game plan. This matchup will very well be like two Saiyan’s battling to absorb the others power, with Simon saying – “As we’re both anime fans, this one is going to be electric.”

The Co-Main event of the evening is a light heavyweight bout for the Victory fights Amateur title, as Mikel ‘Big Smoke’ Yanni takes on a familiar opponent Steven Martin.Yanni is on his way to becoming one of the hottest prospects in MMA as he has very sharp striking, and his technique only means one answer… Knockout! Yanni currently holds a win over his opponent when they fought 9 months ago with “Big Smoke” dispatching of martin in the first round of their fight with a heavy barrage of strikes. So, will the current 1-0 over Martin allow him to become 2-0 and lead him to championship gold? With a strict camp Yanni believes in train hard fight easy. He comments – “I just want to fight now, all the hard works done. I’m ready, he’s ready, let’s have it.” However, Martin will be looking to get the loss back and prove that he is the better fighter out of the two and equal the score board as he has been hard at work in the gym correcting his mistakes from the last fight, ensuring he steps into the cage the best version of himself. With Martin also carrying knockout power in his hands, this is a fight of who lands the fastest and hardest wins. Both men will stay in the pocket and phone booth fight to entertain themselves and the fans as they only understand one thing… violence.

Our featured fight of the night is an amateur middleweight bout between Connor Wills as he takes on Ojo. Wills is a very promising amateur fighter who is very well rounded and will take the fight wherever he needs it to go to get the victory, whether that will be a stand-up warrior or a grappling chess match. Wills will be looking to further build his amateur resume by taking no easy fights, to prove himself and be one of the best and promising amateur middleweights in the UK. However, standing in his way is a familiar face to MMATV, as Ojo was a contestant on the hit reality show Find A Star. He is looking to draw on all the world class coaching he received on that show and all his knowledge that he’s learned in the gym to help push him closer to his goal of being the best in the UK. Ojo will be looking to use his crisp boxing and footwork to dance around his opponent and hit him hard at range with his long reach, to pick his opponent apart in a Jon Jones fashion. The boxing isn’t the only trick Ojo has as he is quite slick on the ground, always creating scrambles and isn’t afraid to shoot on his opponents to drag them into deep waters. He had this to say – “Just want to get in there and tear my man’s head off.”

If you haven’t been able to get tickets don’t worry because your friends at MMATV have your back for the price of £12.99 so you can buy the PPV (pay per view) and enjoy an action-packed night of fights from the comfort of your own home!