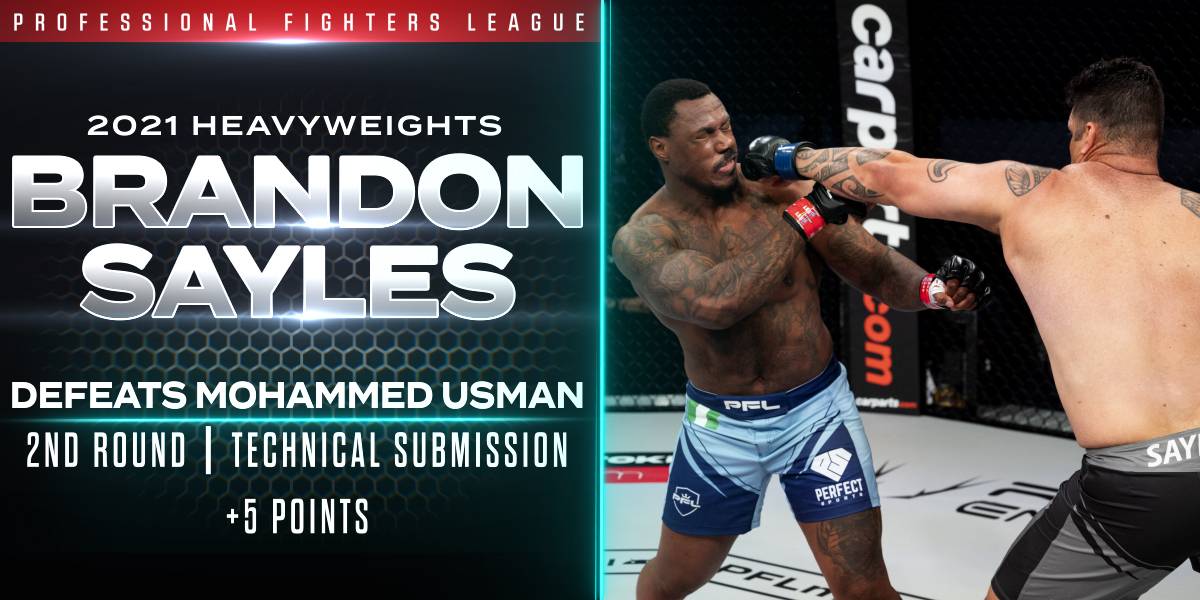 A pair of League newcomers collided in the Heavyweight division on the third PFL card of the year as Nigeria’s Mohammed Usman (7-2) met Hawaii native Brandon Sayles (6-1). Usman is the younger brother of pound-for-pound great Kamaru Usman, who holds the UFC’s welterweight title. Like his brother, Usman has a strong athletic background and entered the match-up having finished five of his seven wins. Sayles is an active-duty member of the Army, who serves as an instructor for the Army Combatives program. He had stopped all five of his career wins leading into his League debut.

Sayles threw a push kick to keep Usman at range. Usman worked the body with a jab, then went upstairs with a second strike. Sayles landed a heavy hook that prompted Usman to shoot, but the fight stayed on the feet. Sayles delivered a left hand again and Usman answered with a right hand. The two big men traded power punches in the center of the cage. Sayles attacked the lead leg of Usman with kicks. A counter left from Usman found the jaw of Sayles. Usman attempted to change levels, but Sayles was able to shrug him off. The kicks of Sayles kept Usman on the outside. An overhand right from Usman connected as Sayles looked for a Superman punch. They continued to swing until the bell sounded.

The second frame started like the first, with Sayles landing a kick. Usman reached for his jab as he tried to get inside on his larger foe. A crisp right from Usman landed clean, but Sayles took it well. The left hook of Sayles found a home and dropped Usman. He flurried with punches, but Usman survived. Sayles latched onto his neck as he stood and backed him to the fence. Usman was able to defend the choke and escape the clutches of Sayles. A right hand from Sayles dropped Usman a second time. Sayles jumped into the mount and Usman went belly down. The neck of Usman was exposed and Sayles slapped on a rear-naked choke. Usman never tapped, instead going to sleep.

The second-round victory for Sayles earned him five points in the Heavyweight standings.