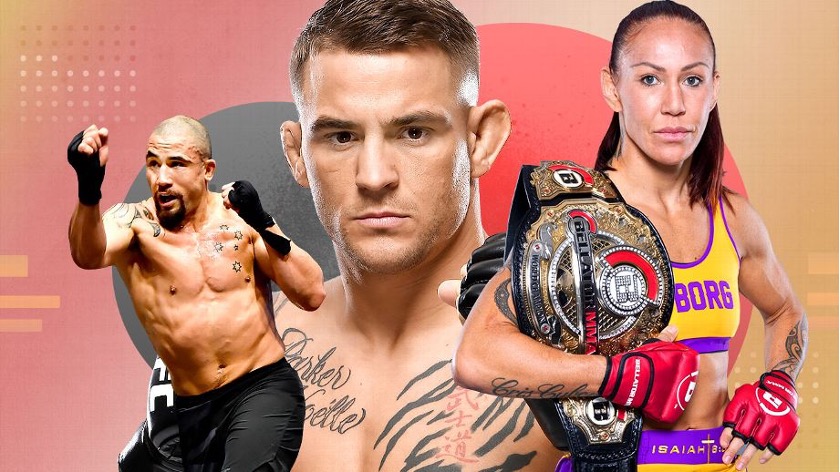 As the UFC looks to kick off 2021 with two elements that were sorely lacking for most of 2020 — Conor McGregor and fans in attendance — this brief pause in the calendar offers the perfect window to take stock and look ahead.

So, who will have the best year of all? After a 2020 that was anything but normal, there will be plenty of opportunities in 2021 for fighters to distance themselves from the pack, and our panel of MMA experts sets out to determine who will step forward.

This isn’t a list of the 30 best fighters in the UFC — it’s a ranking based on opportunities that fighters have already signed on for or project to have in the coming year. It takes into account who they’ll be fighting and who else could stand in front of them in their respective divisions over the next 12 months.

And while there are certainly some surprises to be found on this list, just because someone didn’t make the cut for this top 30, it doesn’t mean they can’t drastically improve their fortunes over the next 12 months. In fact, when you compare this year’s top 30 to what was projected for 2020, the overlap isn’t as big as you might imagine.

And so, without further ado, let’s dig into the first 10 entries on the list — those checking in from 21-30.

2021 outlook:  Last year, Whittaker’s desire was in question. He was burned out on MMA and considering stepping away from the sport. But leading into 2021, “The Reaper” is as relevant as ever. The former UFC middleweight champion returned to beat Darren Till in July and Jared Cannonier in October. He looked excellent in both fights and very much ready for a rematch against the man who took his title: Israel Adesanya. While Adesanya is heading up to light heavyweight to challenge Jan Blachowicz for that belt in early March, Whittaker’s next fight will be a big one, and he’s on the verge of another standout campaign. — Raimondi

Next fight: March 20 vs. Derek Brunson

2021 outlook: What can Holland do for an encore? Win six fights in 2021? No, from here on out, Holland’s path is going to be about quality, not quantity. After his December win over Souza, Holland made a step-up-in-the-rankings callout, Brunson accepted and — voila! — Holland had himself a top-10 fight (Brunson is No. 9 in the ESPN middleweight rankings entering 2021). If Holland wins in March, he’d likely find himself in the rankings and being matched up with someone above him, maybe in the top five. In reality, it could take him just two fights this year to inject himself into the title picture. — Wagenheim

2021 outlook: It seems like so long ago now, but early in 2020, prior to the pandemic grinding everything to a halt, Burns was the hottest fighter on the UFC roster. He still managed two signature wins in the span of 2.5 months as the Brazilian jiu-jitsu specialist knocked out Maia and completely dominated Woodley. It was enough to earn him a welterweight title shot against champion Kamaru Usman. But one week before their scheduled fight in July, Burns tested positive for COVID-19 and had to withdraw. Usman fought Jorge Masvidal, beating him by unanimous decision. Burns will finally get his title shot next month. – Raimondi

2021 outlook: Boy, was 2019 big for Harrison. She entered that year with just three pro MMA fights under her belt, but by New Year’s Eve she had four more wins and a $1 million prize hitting her bank account for winning the PFL women’s lightweight championship. The two-time Olympic judo gold medallist did not find 2020 so lucrative, though, as the pandemic cancelled the entire PFL season and she had to temporarily hop over to Invicta FC just to get a fight. Now Harrison is set to resume her PFL run — make that PFL domination. No one in the third-tier promotion has yet been able to handle her, and don’t expect that to change in ’21. There are no guarantees in sports, but they had might as well start writing out a check for another mil to K-A-Y-L-A. – Wagenheim

2021 outlook: Namajunas rebounded from her title loss to Andrade by beating Andrade in an excellent rematch performance in July. By all accounts, Namajunas should now be next in line for a chance to win back the UFC women’s strawweight title, but there seems to be a holdup in the negotiations of a bout between Namajunas and champion Zhang Weili. No matter how that shakes out, Namajunas has a chance to get the belt back in 2021 and could be primed for a huge year. — Raimondi

2021 outlook: It all comes down to UFC 257, right? If Poirier defeats McGregor, the lightweight division is his for the taking, and this will look like a woefully low ranking. The reason Poirier ended up down this low, of course, is that a lot of our voters — just like the oddsmakers — favor McGregor on Jan. 23, so McGregor ended up significantly higher in these rankings (no more spoilers). But what better opportunity for Poirier to reassert himself among 155-pounders, less than a year and a half removed from his unsuccessful title challenge? A win over McGregor would be as high-profile as a win can be, and with Khabib Nurmagomedov retired, there’d be no ceiling for Poirier. – Wagenheim

2021 outlook: Last year, Cyborg became the only fighter in history to win titles in four major organizations when she defeated Budd to win the Bellator women’s featherweight championship. She capped the year with the first submission victory of her MMA career over Blencowe. Cyborg, one of the two best female MMA fighters ever, proved that she still has plenty in the tank and remains a fearsome name at the top of Bellator’s women’s 145-pound division. This coming year is likely to be a big one for Cyborg, who is eyeing a boxing match against a prominent name like Katie Taylor. — Raimondi

2021 outlook: Few in MMA delivered as stellar a 1-2 punch of knockouts last year as Blachowicz did. And for his efforts, he gets to fight one of the hottest and most dangerous opponents in the sport. No problem, though, because Blachowicz expected his ascent to the top of the light heavyweight division to put him in the cage with the pound-for-pound No. 2 and GOAT candidate Jon Jones. In that light, taking on a middleweight, even in a fight that he’ll enter as an underdog, might not seem as daunting. If Blachowicz throws a wrench into the presumed coronation of Adesanya, it’ll vault the powerful Pole toward an even bigger year in 2021. – Wagenheim

Next fight: March 27 vs. Johnny Walker

2021 outlook: In 2020, Crute was voted ESPN’s top MMA fighter under 25 years old. The 24-year-old Aussie is one of the most intriguing up-and-coming fighters in the world. Crute has nine finishes in 12 career victories and is starting to build some momentum toward a run at light heavyweight title contendership. Some new blood is needed in that division, and Crute has a chance to be a factor at 205 pounds for some time to come. First up in 2021 for Crute will be the exciting Walker, another fighter with upside in the division. If Crute can win that one, it would vault him into the conversation about fights in the upper tier at light heavyweight. – Raimondi

Next fight: TBD vs. Emmanuel Sanchez

2021 outlook: The man known as “Pitbull” is Bellator’s lone two-division champion, and that could make him a busy man this year. Freire has not competed at lightweight since winning the belt in May 2019, so something has to give there. But how can he squeeze in work at 155 pounds when he’s so busy at 145? If he gets past Sanchez in the semi-finals of the Bellator Featherweight World Grand Prix, the final would be perhaps the biggest fight in the promotion’s history: “Pitbull” Freire vs. undefeated AJ McKee. Bellator bouts, even the better ones, sometimes struggle for attention in a UFC-centric MMA world, but that fight would be a star-making event. – Wagenheim