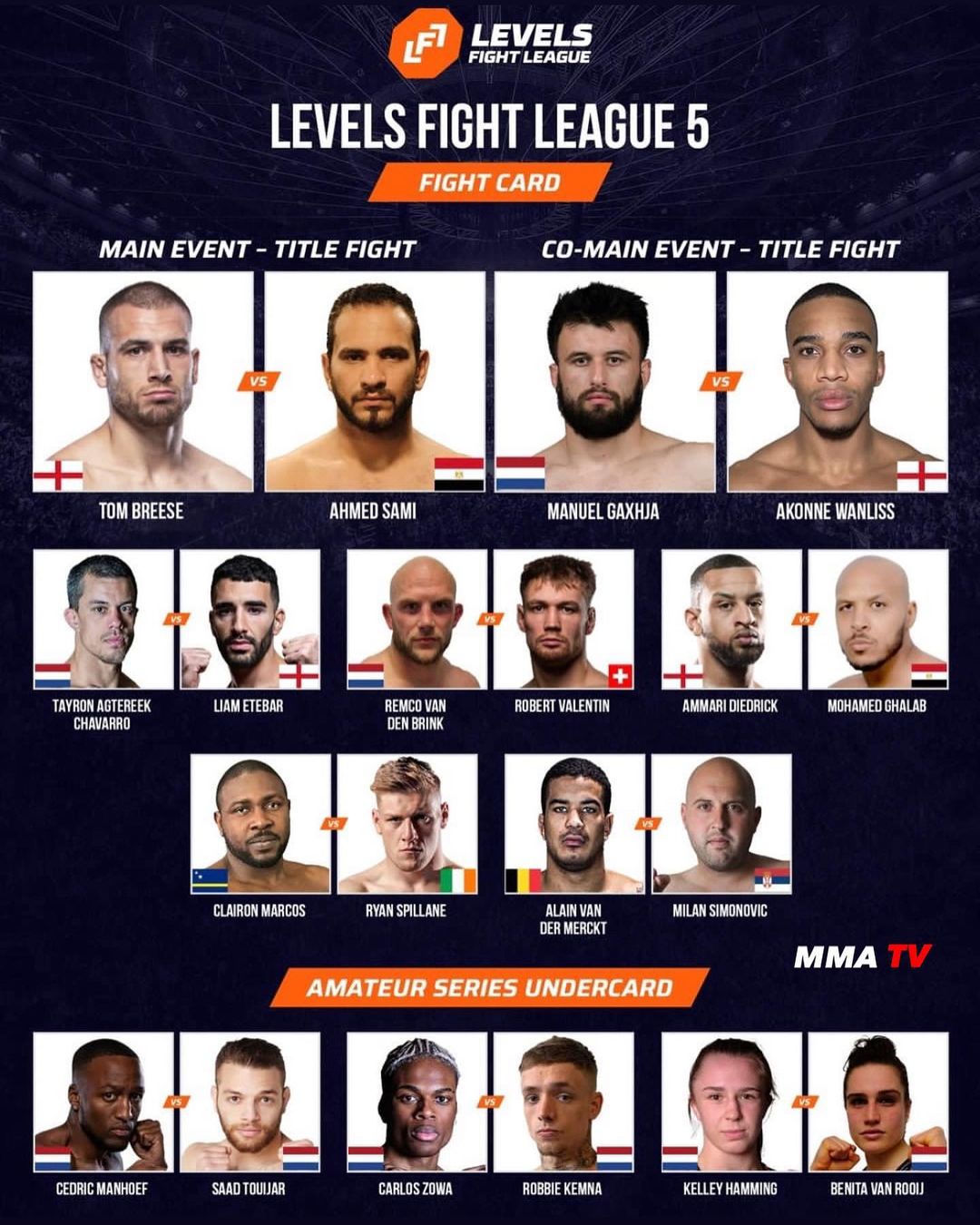 Level Fight League (LFL) is back on Saturday June 26th and hosting huge card with some huge names, this card is stacked top to bottom with two titles fights and high-level fights showcasing all the best talents around Europe with the action looking to start at 5pm (GMT).

The Main Event of the evening is a Middleweight Title fight between Team Renegades, the same gym Fabian & Leon Edwards train out of, Tom Breese who will be looking to defend his belt. The Former UFC Competitor had this to say “I’m always coming for the TKO. I’m coming to box this guy up. I’m defending the title on LFL but more importantly it’s my health on the line and his health on the line, so it’s killed or be killed.” Breese who had 62.5%-win percentage in the UFC will be looking to carry on his win streak by defending his belt with extreme violence if need be as he went to the judges score cards against Sean Strickland who is well known for his violent fights. The challenger Ahmed Sami, who fights out of Egypt, will be looking to use his explosive power to try put Breese away as he has a 57% knockout rate in his fights with only two submissions and one win that went to the judges’ scorecards. This spells out fireworks for the main event as both men are going to meet in the middle and see who drops first. This is a fight nobody should miss out on!

The Co-Main Event is a Lightweight title fight between another one of Team Renegades roster Akonne “J3DI” Wanliss, the former Bellator fighter who will be looking to showcase yet another striking masterclass against his opponents as 75% of his wins have come by the way of KO/TKO with that other 25% being submissions, showing that he’s always chasing the finish in the fight. Wanliss will be looking to restart his winning streak by executing order 66 as he said this “Emanuel will be another one annihilated by lightsaber to the chin. The force will be unleashed!” However, his opponent Manuel Gaxhia, who has a perfect record of 7-0-0, will be looking to continue that winning streak with a big win over a very reputable opponent. However, Gaxhia has not fought in three years but he guarantees that ring rust is only a myth as he had this to say “It has been more than 3 years outside of the cage for me, during this time my game has evolved a lot and can’t wait to bring the show.” This fight will meet its expectations when you have two game opponents looking to put a good show on for the fans who are attending and those watching at home. Make sure not to blink before it’s over!

The penultimate fight before the main events is a Welterweight bout between Tayron Chavarro who is only 3 fights into his career but is one to watch as he was undefeated as an amateur and looking to replicate the same success in the professional scene, currently riding a two fight win streak showing how well rounded of a game he has to offer. He commented “Expect fireworks it’s going to be a very entertaining fight.” Standing in his way is his experienced opponent Liam Etebar who hasn’t lost a fight since 18th September 2009, so he will be looking to extend that decade long win streak and put a spanner in the works for his opponent. Etebar is well rounded and will welcome the fight wherever it goes, he said this about the fight “Ive been in the winning streak for the last 9 years I feel like a warrior. What can I say, I’m gifted. I’m one of those lucky guys that can roll out of bed of partying and smash anyone that stands in my way. I can strike, I can grapple, I can wrestle. I got it all.” This fight is a great match up and is a fight to excite the crowd for the fights that follow it.

This is a great card top to bottom showcasing some of the fiercest and hungriest fighters from across Europe so make sure you don’t miss out for £12.99 you can watch the PPV straight from your home, with fights starting from 5pm GMT. Click the link to order the PPV :https://www.mmatv.co.uk/mma/levels-fight-league-5/