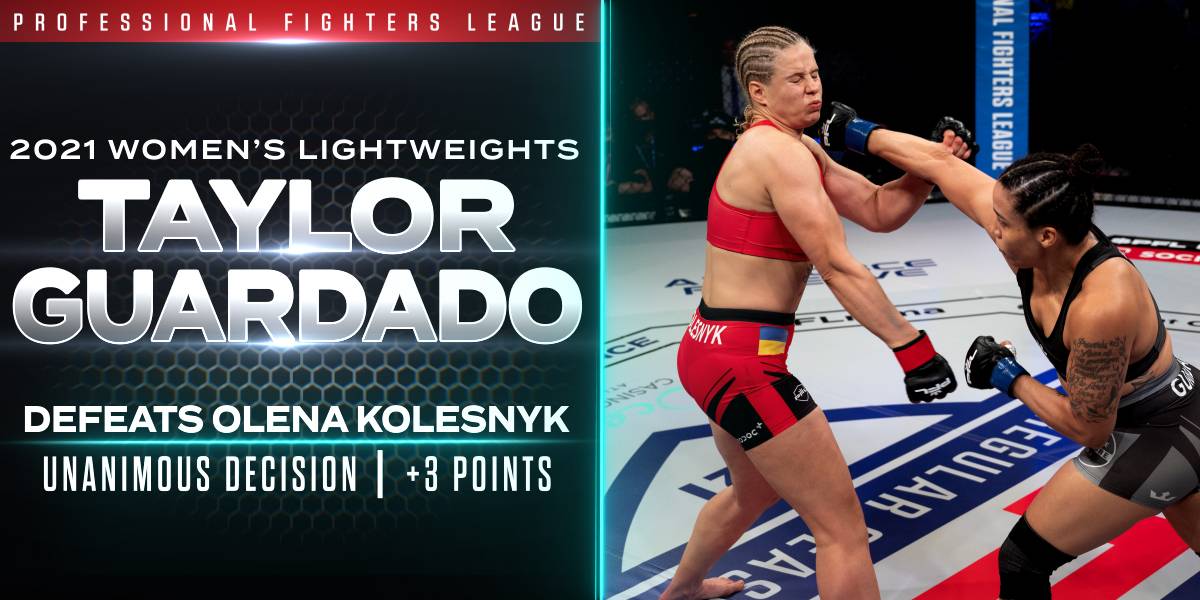 Kicking off the Women’s Lightweight Regular Season at PFL 3 was a match-up between American Taylor Guardado (1-1) and Olena Kolesnyk (5-3) of Ukraine. The two Invicta FC veterans were both making their League debuts.

After a few feints, Guardado looked for a takedown, but was quickly reversed by Kolesnyk. She pushed Guardado to the cage and looked for a toss. Guardado transitioned to Kolesnyk’s back and secured both hooks while standing. Kolesnyk tucked her chin and fought the hands of Guardado. The fight eventually made its way to the floor, but Guardado stayed glued to the back of the Ukrainian. Kolesnyk tried to escape and fell into an armbar attempt. She was able to defend and landed in the top position late in the round. Kolesnyk rained left hands, but it allowed Guardado to return to her feet. They exchanged knees as the frame came to a close.

Guardado marched forward to start the third. Kolesnyk clipped her with a lead hook before getting countered with a jab from the American. Guardado secured both underhooks and dropped to the canvas, landing on top of Kolesnyk. A series of short left hands landed from Guardado as Kolesnyk tried to tie her up from the bottom. With a minute left in the fight, Kolesnyk recovered her full guard. She desperately tried to escape from the bottom position, but Guardado closed the stanza in the top position.

The judges were called upon to render a verdict and Guardado earned three points in the lightweight standings with the decision victory.