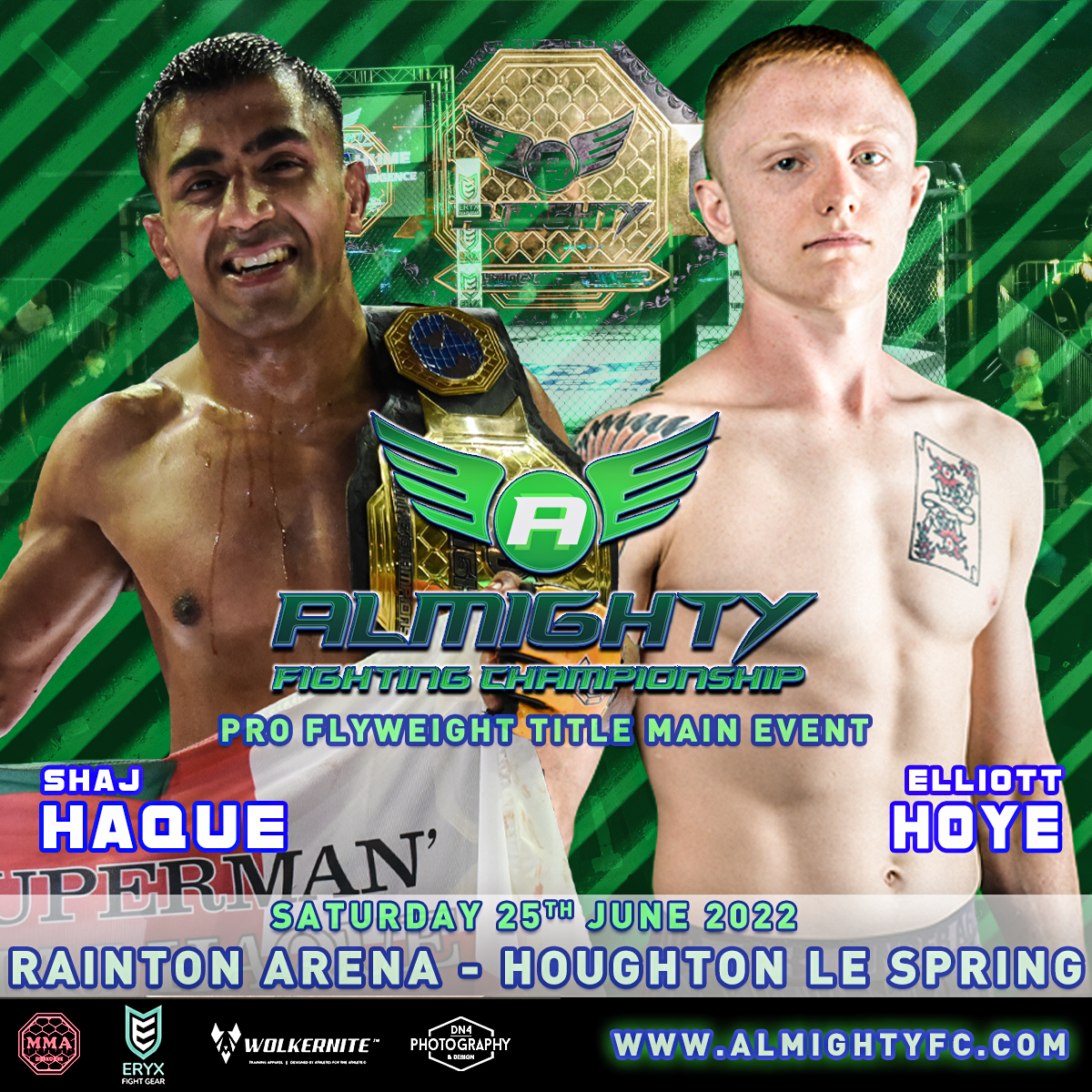 Almighty Fighting Championship is back on Saturday 25th June with their 26th Fight card and this like the rest of the Cards before is stacked with some of the best Amateur and Professional MMA fighters the UK have to offer, boasting a 14-fight card which is sure to entertain the fans and will go down in the history books.

The main event is a Flyweight Title fight as the Champion Shajidul Haque, who is riding a two-fight win streak and who many say is on the brink of going to the UFC, will be looking to successfully defend his belt by grinding his opponent down and doing damage over the course of five rounds as 9 of his 12 wins have come by the judges’ score cards. But the veteran of the cage has knockout power and sublime grappling behind him “Almighty FC is doing a fantastic job with some really good cards and I’m excited to be headlining the card once again. It’s funny how quick you go from the upcoming prospect to the veteran in this sport lol (laugh out loud) but I will show everyone that I am still at the top of my game.” The challenger Elliot “TopBoy” Hoye will be looking to dethrone the champion as he will be looking to carry on his win streak by putting on an exciting fight and showcasing his skills against a very reputable opponent. With Hoye having five submission wins and two knockouts out of his 8 wins, it shows that he is always chasing the finish whether stood up or taking it to the ground. The challenger had this to say – “‘In my opinion Shaj is a UFC level fighter. I am excited for the test and opportunity to show my skills against one of the UK’s best.”

The Co-main event is a Middleweight bout between The Lodge Fight Clubs Jack Comby, who is a promising Professional who is yet to see the judges’ score cards in his professional career. Comby will be looking to come back from his loss by showing that he is not down and out and still has plenty to offer the fans and spectators watching with his fastest win coming in 33 seconds in the first round. It’s safe to say you can’t blink when watching this fighter – “Can’t wait to be back on Almighty it’s going to be another amazing show with a great fight card. Last time round was ecstatic, the fans were amazing just a pleasure to be back on the show and can’t wait to have a good tear up and watch my teammates smash it as well hopefully get another fight of the night bonus.” His opponent David Connolly is also looking to get back to winning ways as his last trip to the Almighty cage wasn’t as successful as he planned but he will be looking to prove to people watching and future opponents that he is a contender within the division and to not look at him as an easy fight, as he is always dangerous and is always looking to punish his opponents. This fight has knockout written all over it so stay in your seats and don’t blink or you will miss it.

The penultimate fight before your main events is a fight in the Welterweight Division between Yannick Nnouka & Mattia Belluomini. SBG South Shields Nnouka is making his professional debut after an amateur career in which he had great success. He will be looking to recreate that success in the professional circuit with a picturesque knockout to start his professional career and putting all other Welterweights on notice that there’s a new dog in the yard. However, his opponent Belluomini is looking to spoil the party as he himself is looking to show that he is not to be trifled with as he is looking to comeback from a loss in his last fight, making him even more hungry to prove to fans and the other welterweights that he is no pushover in the division. He commented “I’m coming from a heavy defeat, but everything has changed since then: country, game plan, my mind and the 25th of June I’ll demonstrate to you. I’m back!”

The opener for the main card is a Featherweight bout between The Lodge Fight Clubs Kai Holmes & Jake Robinson. Holmes is currently undefeated as a professional and will be looking to keep it that way as he got his picture-perfect debut as a pro last time, he fought with a TKO win in the first round. He will be looking to replicate that dominant performance again and will be looking for some of the glory and success he had back on the amateur scene. He commented “I’m just hungry to get back in and compete again I’ve had a few injuries which has been holding me back this year a little bit, but I’ve still stayed in the gym and kept improving. As for the opponent it doesn’t matter for me, I just want to compete. I’m hungry to get back in and compete. I look forward to showcasing my skills June 25th in front of a packed almighty crowd.” Making his debut as a professional after just 1 amateur fight, which he won in 9 seconds into the first round, will be looking to prove that he is a force to be reckoned with in the Featherweight division and with his track record proves that he has serious power within his hands. He commented “My heart is too big for Kai! He’ll be composed until he realises, he’s in with a starving silverback!” This fight spells out for fireworks and has potential fight of the night written all over it!

If you were unable to get tickets to this fight don’t worry as we have you covered for just £12.99 you could watch this amazing card from the comfort of your own home so click the link and order the PPV so you never miss the action: https://www.mmatv.co.uk/mma/almighty-fighting-championship-26/